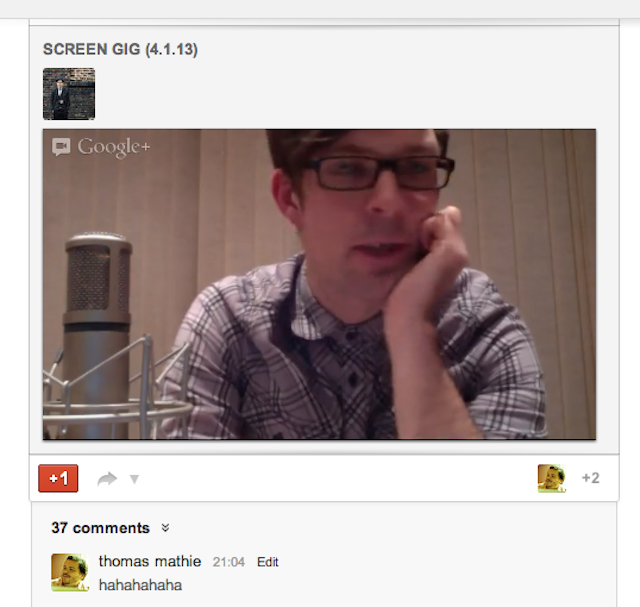 On Friday I played a little SCREEN GIG via Google Plus Hangout. In 2011 I played a number of shows like this via Ustream, even streaming the solo house shows that I did. So I thought I would try it again in 2013 via Google Plus as I had been reading really good things about it.

I spent Thursday evening setting up and testing things out which was all pretty frustrating as various things didn’t work the first time. Google Plus has a fantastic ‘Studio’ setting which puts all sorts of compression and a little bit of reverb on your sound as a default. This makes the sound pretty good quality. Eventually on Friday morning I got it to work as I wanted it to! Phew!

At 8pm I set up the mixer, laptop and mic (and tea and chocolates!) ready to start playing at 8.30pm.

I really enjoyed playing the show and interacting with everyone via Twitter, Facebook and Google Plus. I am hoping the next time I do one I will be able to interact with you all in one place (I am working on this!). I played one of our new songs ‘Goodbye Day’ which people liked and even got to play my cover of ‘Slip of  a Girl’ by Duke Special when one of the viewers requested it! You can watch the whole gig on the SCREEN GIG PAGE.

I will write a ‘How to’ for Screen Gigs as a few people have been asking me how they could do one. Watch this space…

A HOUSE SHOW WITH LIZ LAWRENCE…

Coventry is looking incredible with all the lights

Today was a really interesting day. An early start

Taken on my run on Friday. I love running in the a

On Saturday I helped bring 80 volunteers to Foodba

Over the last few weeks I’ve been involved with

Great coffee and conversation with @johnpoetbernar

On Saturday I managed to dodge most of the heavy r

Last night I had the honour of playing at @positiv

I’ve been really enjoying working on my @cov_cul